For a lot of folks out there, tequila is the ‘wild child’ in the spirits family. It’s got an (admittedly well-earned) reputation as the life of the party. While we won’t argue that tequila is a good way to have a great time, it’s also one of the most diverse, historically significant spirits that exists today. In fact, tequila (in one form or another) has been around for the better part of 3,000 years, making it North America’s oldest spirit. From Aztec Emperors to George Clooney, tequila has no shortage of legendary connoisseurs -- but how did it get here, from there?

In the canon of spirit evolution, tequila would come immediately after a drink called ‘pulque’. Long before anyone was distilling tequila, pulque was the main squeeze. We’ve talked a bit about the milky, odd drink in the past, but it's hard to overstate just how ancient pulque really is. The first known example of pulque being made comes around 200 AD, and the beverage was known to be a favorite of the Aztecs. Pulque was not distilled like tequila is today -- instead, it’s made from the fermented sap of the agave plant. This creates a sour, almost yeasty flavor that can be...well, divisive.

Personal taste aside, pulque was a hugely important, almost sacred beverage to the Aztec people. In fact, the Aztecs had two separate deities that were linked to pulque. First was Mayahuel, the goddess of the agave plant, and the second was her husband Patecatl, the god of pulque.

This guy has the best job ever. Come on.

It would be a few centuries, though, until something close to modern tequila came to be. In 1519, Hernan Cortes famously invaded Mexico and conquered the Aztec empire, claiming it for Spain. At the time, brandy was the drink of choice for the Spanish empire, but supplies were running low. “Borrowing” a technique from the Aztec people, the Spanish soldiers learned how to make a simple, primitive agave wine that was quite similar to today’s mezcal (note: all tequilas are technically mezcals, but not all mezcals are tequilas). It took a few decades for the Spanish soldiers to really get anywhere with this new technique, but it certainly laid the foundation for tequila as we know it today.

A trade route would be opened in the mid-1500s, one that would directly lead to the invention of modern tequila. This trade route went between Manila (in the present-day Philippines) and Mexico. The concept behind the trade route was an ambitious and perilous one, even just on paper. Goods would be sailed from Manila to Acapulco, and then loaded onto pack mules to cross Mexico by land. From there, these goods would be put back onto a ship, and sailed from Veracruz to Spain. As you could expect, this long journey picked up plenty of cultural hitchhikers.

One such hitchhiker was a coconut wine made in the Philippines. When the Filipino sailors arrived in Mexico, though, there was a decided lack of coconuts. And so, hearing about pulque, they applied the coconut-winemaking methodology to the agave plant. And just like that, tequila was born. A few years later, in 1600, the Marquis of Altamira would construct the first major commercial tequila distillery near the town of (you guessed it) Tequila, in present-day Jalisco. 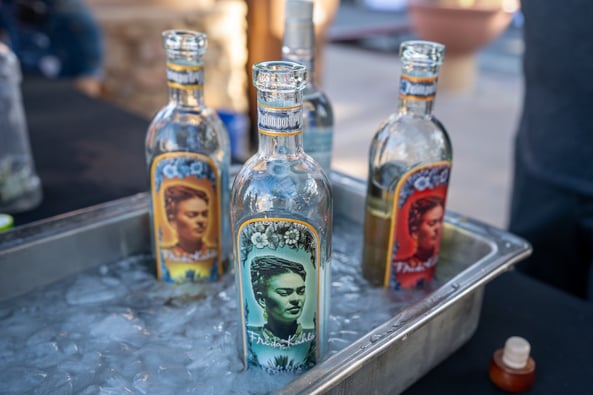 This is what summer looks like. Three bottles of tequila in a bucket filled with ice.

If we fast forward a bit to the 1700s, we find one of the greatest rivalries in all of spirits: Cuervo vs. Sauza. We won’t make any bold claims about one over the other today, but Don Cenobio Sauza’s discovery is worth pointing out. Sauza was the first to identify blue agave as the most ideal species of the agave plant to use in tequila production. It would be years before the Mexican government gave its stamp of approval on this discovery, but other tequila producers quickly followed Sauza’s lead.

Over the next couple hundred years, tequila would strengthen its foothold in Mexican culture -- despite a relatively short, ten-year prohibition in 1785.

So, how did the spirit make its way to America? Ironically, we have Prohibition to thank for that. During Prohibition, Americans had almost no access to quality spirits. It was either bathtub gin, or second-rate whiskey. But, for those closer to the west side of the country, Tijuana was not far away. American scofflaws and ne'er-do-wells were happy to take the trip down south, where quality tequila could be found in abundance. And then, by the time Prohibition ended, Americans found themselves still quite in love with the Mexican agave spirit. Fun fact: the margarita was invented right around this time... by an Irishman, living in America.

In 1974, we have another landmark moment in the history of tequila. The Mexican government declared the term ‘tequila’ as its own intellectual property, meaning that no other country could legally produce the agave spirit and label it “tequila”. In addition, only certain areas of Mexico could produce and age tequila. Although these regulations may seem strict, they’ve done well to protect tequila’s cultural status. 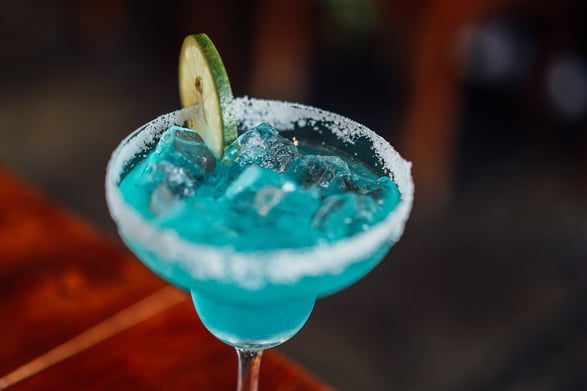 We've never had a blue margarita before... but we reckon' it might be pretty dang tasty.

Looking at even more recent history, tequila has absolutely experienced a resurgence, and even a rebranding, in the past decade. It’s gone from being seen by Americans as a party supply, to holding its own alongside the finest sipping whiskeys. Aside from the big two (Sauza and Jose Cuervo), there’s no shortage of high-quality options available today. Brands like Fortaleza and Herradura make great ranges of tequila, from mixable blancos to perfectly sippable añejos. And given all that, the cocktail scene has absolutely taken notice. Tequila bars have popped up all across the country, and tequila is now being wonderfully re-imagined as both a cocktail ingredient and a spirit to be sipped neat.

So...interested? To bring tequila into your bar, you don’t need to tear down the entire menu. Tequila and mezcal are being worked into all kinds of classic cocktails, from tequila old-fashioneds to tequila mojitos. Our advice? Experiment! There’s no shortage of fantastic tequilas on the market today, and from the patrons’ side, there’s certainly no shortage of demand.