Get industry research and trends delivered straight to your inbox.

Most Popular Beer and Spirit Brands in February

March has officially arrived and we’re finally giving winter a swift kick as we look ahead to brighter days. In this report we set out to reveal the most popular products in bars and retail establishments. Our monthly series is a part of our initiative to better understand micro-trends in the beverage alcohol trade.

In this report you will discover the most popular beer and spirit brands, along with trending beverage categories and top products.

The following report analyzes data collected from Provi users in the month of February of 2018. These users represent hundreds bars, restaurants and retail establishments in Illinois. Percentages represent engagement metrics that include events like page views, searches and add-to-cart actions.

Spirits take the lead in February

Spirit’s barely beat out beer sales in the month of February. With a difference of only 1 percent, we wanted to focus on these two categories for the report.

Anheuser-Busch InBev lives at the top

There’s a lot of talk around industry heavy-weights like Anheuser-Busch (AB) and MillerCoors losing ground. Our reporting continually paints a different picture. While the two titans remain the top manufacturers, AB remains on top in February.

It’s a tight race between Anheuser-Busch and MillerCoors. Bud Light only beat out Miller Light by a fraction of a percent this February— closely followed by Coors Light.

As we saw in our Chicago’s Most Popular Beer Report from Q4 of 2017, IPA’s and Pale Ales continue their popularity through the new year. We will focus on these two product categories in the next two sections of our most popular beer and spirit report.

Daisy Cutter is crushing it

Half Acre’s Daisy Cutter knocked it out of the park this February— outperforming other top products in the American Pale Ale (APA) category three times over. Similar to last years report, 3 Floyds’ products remain a crowd favorite among APA drinkers.

Whiskey interest amounts to more than liqueur and tequila combined in February this year. Vodka drops to fourth place, narrowly falling behind tequila— a trend to keep an eye on this summer. Gin and rum continue to lose popularity.

Jameson was the preferred winter warmer

If you live in the Midwest, its more than likely that Jameson flows through your veins. It comes as no surprise that Jameson remains a top favorite in the bourbon and whiskey category.

Craft cocktails are alive and well

Last year, the world went crazy for Casamigos Tequila— preluding to a possible market takeover from Patron Silver. It looks as if we will have to wait until the Summer months to see the impact of Casamigos popularity.

With almost double the popularity of Grey Goose in the month of February, Tito’s Vodka continues on its path to taking over the world. Even though vodka’s popularity was down overall last month, Tito’s outshines its competitors.

Subscribe to get stories delivered straight to your inbox 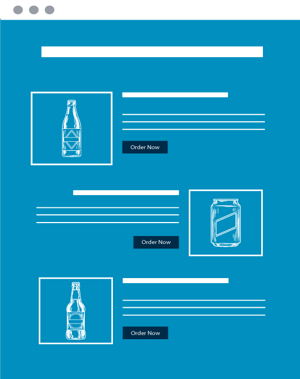